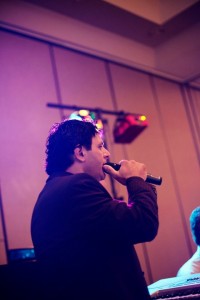 In 1998, Amin gained international recognition with the release of his first video clip entitled “Ya Msafer”.  This song and video aired on all the major Arabic radio and television stations including ART and MTV Europe’s “ Mashaweer”.  Amin was granted live interviews on LBC Int. Lebanon, and ANA Washington D.C.

In 1999, Amin released his second video clip,”Wailek” which was featured on  art’s Top20 and WEEKEND shows.  “Wailek” is currently playing on ART and MTV Europe.   Amin again made appearances on LBCI, and ANA television stations.  He was also featured as a special guest with Dr. Hala Serhan on ART’s show LAYLA.

As an Arabic artist in America, Amin embraced the opportunity to introduce the beauty and richness of our music to Americans as well as those of all different nationalities. Amin’s style of music is Middle Eastern with western and European influences. Amin and his producers entered “ Wailek” in a national contest, and were bestowed the honor of receiving the 1999 Telly Award for best video production. Inspired by the success of Latin artists Amin aspires to pioneer the music industry and put Arabic music.

Amin’s music plays on Arabic radio and television stations in the US, Europe and throughout the Middle East.  His CD’s are available at all the online Arabic

“Music is a universal language that speaks to the heart.  It has a magic that transcends all boundaries.  It is a great pleasure to share my music with you.”